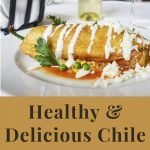 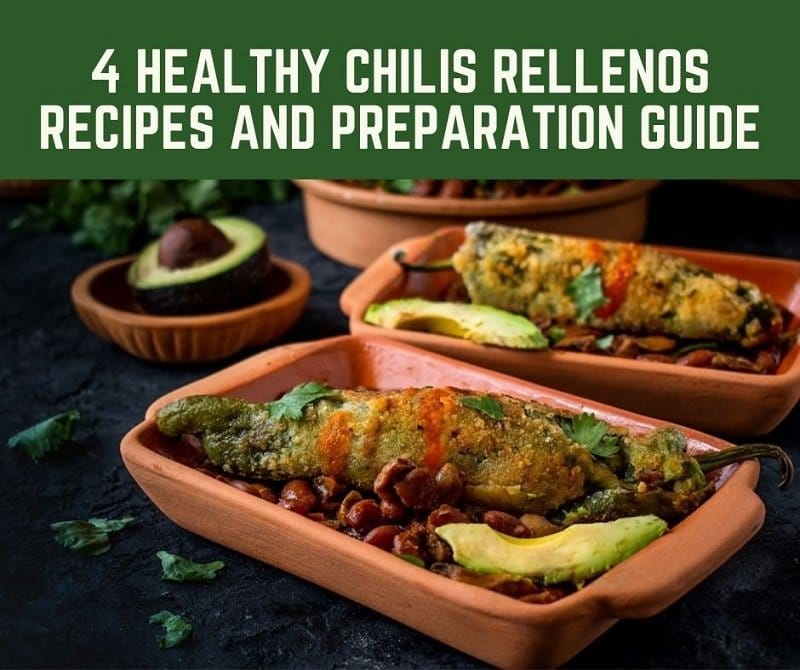 What are Chile Rellenos, and what does it mean in English?

Chile Rellenos simply means “stuffed peppers.” They’re poblano peppers stuffed with cheese or a ground meat mixture which are then turned over in an egg white or corn masa batter and fried. Typically, they’re served in a spicy sauce.

There are plenty of variations; for instance, you can swap Hatch, Anaheim, or jalapeño peppers for poblanos. It depends on how spicy you want them. Poblanos are popular because their spiciness is mild, and they’re a good size to stuff.

The sauce that accompanies them can be tomato-based, or a blended mix of roast aromatic vegetables. You can sprinkle them generously with Cheddar cheese, or serve with red or green salsa.

To keep your Chile Rellenos lean, you can fry them in minimal, good-quality olive oil, without the batter coating. And they don’t have to be fried at all, although that’s traditional. In this article, we include a baked version and instructions on how to cook them in an air fryer.

The filling can vary to your taste. Some fill chile with the ground or shredded pork. Vegans often use tofu.

Here’s a recipe for healthy Chile Rellenos stuffed with black beans and cheese, roasted instead of fried. 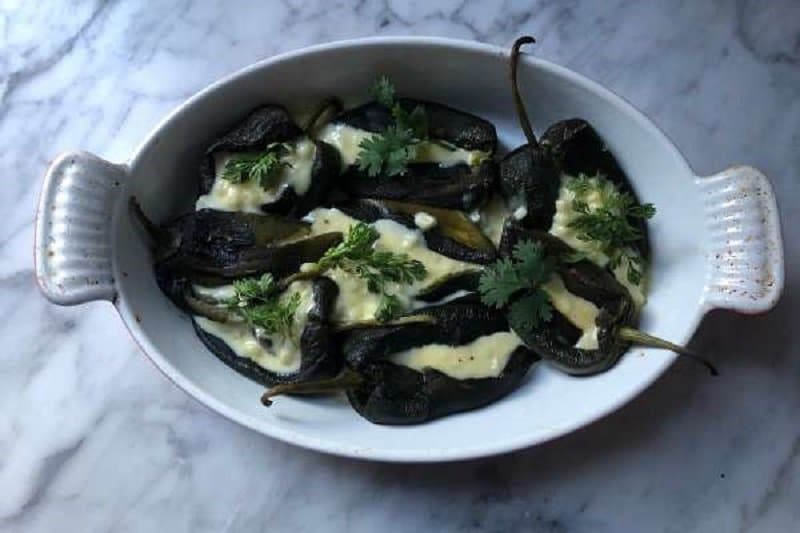 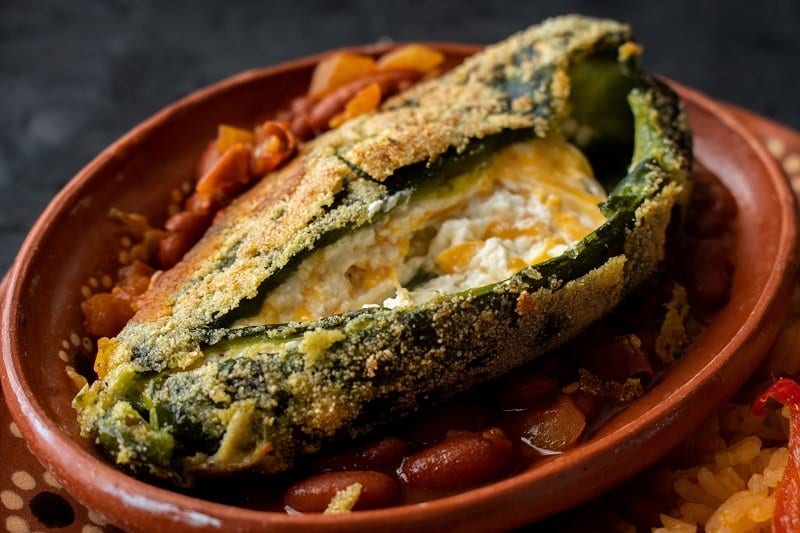 You May Also Like: Zero Point Simple Turkey Chili Recipe 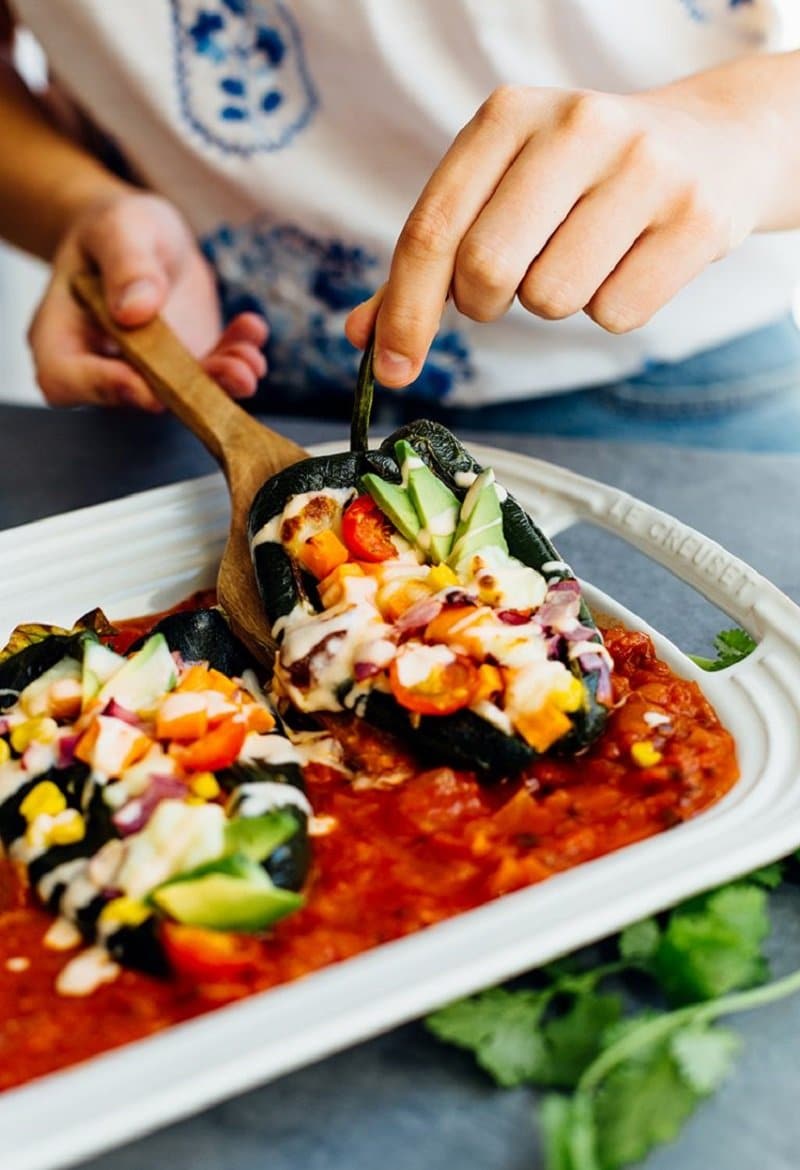 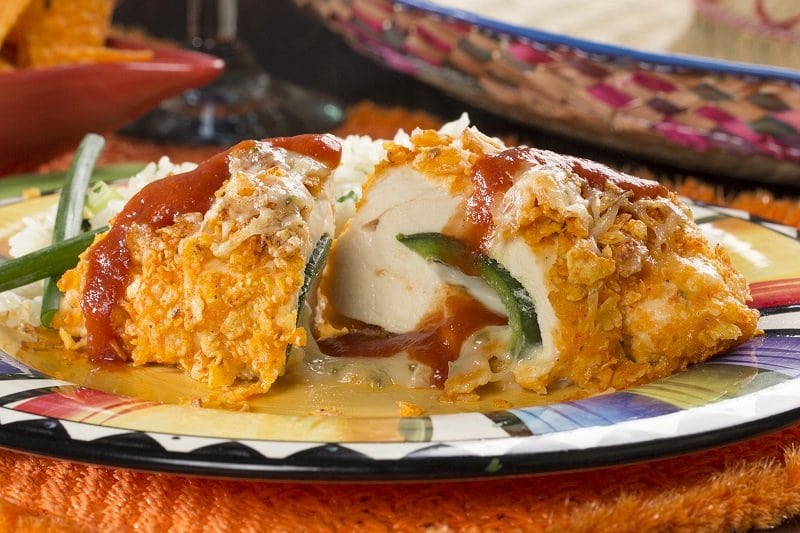 This is a lean and heart-healthy Chili Rellenos recipe that’s bursting with Mexican flavors.
Yield: 4 servings

Combine a can of diced tomatoes with half a chopped green pepper, half a chopped onion, 1-2 cloves garlic, plus chili powder, cumin, brown sugar and salt and pepper to taste. Bring to a boil and simmer for 10 minutes, then cool and blend in a food processor or blender.

How to make Chile Rellenos in an air fryer

These are basic instructions for making 4 Chili Rellenos in an air fryer, with approximate ingredients. For a more exact recipe, choose one of the recipes above.

Can I swap another pepper for poblanos?

Anaheim peppers work well in place of poblanos, being similar in shape and easy to stuff. They’re a bit spicier, though.
If you don’t like heat, cook bell peppers instead of poblanos. They’re tasty, but they won’t have that authentic, hot, Mexican flavor.
If you can’t get enough chili heat, mix diced jalapeños into the filling.

Traditionally, it’s a mix of Asiago and Monterrey Jack cheeses. But there’s no harm in using only one, or the other cheeses suggested above. If spicy heat really isn’t your style, use mozzarella.

Accompany your Chile Rellenos with a platter of sliced avocados and tomatoes, or a fresh, leafy salad, sour cream, salsa, or lime wedges to squeeze over the hot dish. Coleslaw is also excellent as a side dish. For an entire, satisfying meal, cook up some quinoa to serve with the chile.

How long do Chile Rellenos last in the refrigerator?

Refrigerate the dish within two hours of cooking, in airtight containers. The chile should last 3-5 days chilled.

How long can Chile Rellenos be left at room temperature?

Do not eat the peppers if left out for more than two hours. Refrigerate them as soon as they cool down or are just barely warm; that’s your best guarantee of safety when you’re not going to serve them right away. And don’t worry, Chile Rellenos reheat beautifully in the microwave, on the stovetop, or in the oven at medium heat. Just cover them and keep your eye on them, to prevent the sauce from drying out.

You can safely freeze the cooked stuffed poblanos. Store them in airtight containers or heavy-duty Ziploc freezer bags. They will last frozen up to a year. It’s worth making a big batch, to have some on hand when the craving hits.

How to tell if the Chile Rellenos are still good?

Don’t taste any suspicious-looking stuffed Chile (or any other food). Inspect them closely and smell them. Throw out anything that looks or smells off.